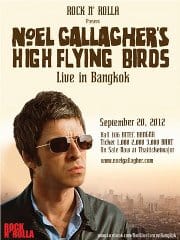 The Thai fans are looking forward with great anticipation to the return of that band’s extraordinarily talented leader, Noel Gallagher, who was last in Bangkok with the iconic Oasis, back in November 2008 when they headlined the ‘Bangkok Rocks’ festival. Rock n Rolla are proud to secure a visit by Noel
Gallagher – the front man is quoted as saying