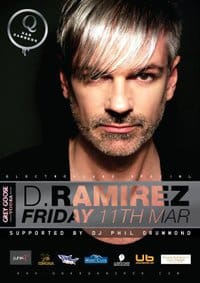 Many moons have passed since this silver soldier first exploded onto the scene. Traversing the globe with his trusty laptop in tow, the roving Ramirez has dispensed his razor sharp productions to unassuming dancefloors with the precision of first class marksman. Whether he’s hidden behind devilish disguises such as The Lisa Marie Experience, Cordial, Finger Fest and Rambo, or performed as the man you know best as D Ramirez, Dean… Marriot has achieved more than an entire legion of lesser DJs.

He’s achieved five top 20 hits, played on every continent and single handedly coined THAT electrohouse sound. He has been awarded Best Remix and Best Producer in DJ Magazine’s Awards and knighted as Player Of The Year by iDJ. His remix of Bodyrox ‘Yeah Yeah’ scored him an Ivor Novello nomination while past exploits such as ‘Columbian Soul’, ‘Time Fades Away’, ‘Pleasure Me’ and ‘La Discotek’ have all achieved coveted Coolcuts and Buzz chart hotspots, championed by some of the biggest DJs in game. Hell, our hero’s even performed on Top Of Pops. Catch his first performance in Thailand only at Q Bar Bangkok