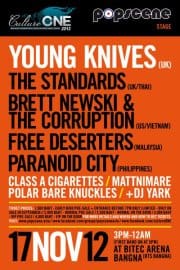 ALL YOU GOOD, GOOD PEOPLE, this is Popscene. An alternative music event organisation run by a group of dedicated and fanatical good music lovers.

POPSCENE, now in its fourth year and based in the sprawling metropolis of Bangkok, is basically an event for the good music loving masses who might feel starved of quality tunes and live, original bands here in this city of sin.

Our aim has always been simple. Firstly, to fill the alternative music void that so heavily exists in Bangkok and secondly, to uncover and expose unknown acts. We want to give them a space in which to perform, launch themselves or at the very least just get heard. We don’t believe that the same bands and the same worn out acts should be given the chance, year after year to play the biggest festivals, most important music events and make the headlines. We believe that music and musicians need to grow, evolve, inspire one another to be experimental with ideas and be creative with musical knowledge. We want musicians to have the words ‘new music’ plastered across their brain, to be original, passionate and adventurous about making music and to commit themselves to being who they want to be and one day having their tunes heard by the masses or their band going to the next level. We want each and every single Bangkok music lover to be curious about new and emerging acts not only from the far corners of the world but from the city they live in.

The Popscene Stage at this year’s Culture One will cram into one day a bunch of bands that are new, inspiring and champions in their own right. Maybe you haven’t heard of them, maybe you have, but this isn’t the point, it doesn’t matter because this is a big festival, a big day and only arse-kickingly awesome bands play at big festivals. You’re going to have to take our word for it that they’re none other than great!

Firstly, the best of Bangkok’s emerging underground scene will be showcased with live performances from Polar Bare Knuckles, Class a Cigarettes, Mattnimare and fresh from their dates in L.A., The Standards.

Secondly, three of the best indie acts from the Asian region. Top-quality bands Paranoid City (Manila), Free Deserters (Kuala Lumpur) and also just back from their US tour, Brett Newski & The Corruption (US/Saigon) will be storming the stage.

Thirdly, and by no means lastly, they’ve been nominated for the Mercury Music award, played the world’s biggest festivals, released three belting albums that have helped shape contemporary indie music. We’re extremely proud to announce our awesome head liners, all the way from England, The Young Knives.

Be there, support it, this is it, this is where it starts, the future of Bangkok’s music scene!

THE LINE UP FOR THE POPSCENE STAGE IS AS FOLLOWS…